Populism v capitalism – business as a force for good?

WE ARE ALL ACTIVISTS NOW: OVER HALF OF ALL ADULTS PROTEST 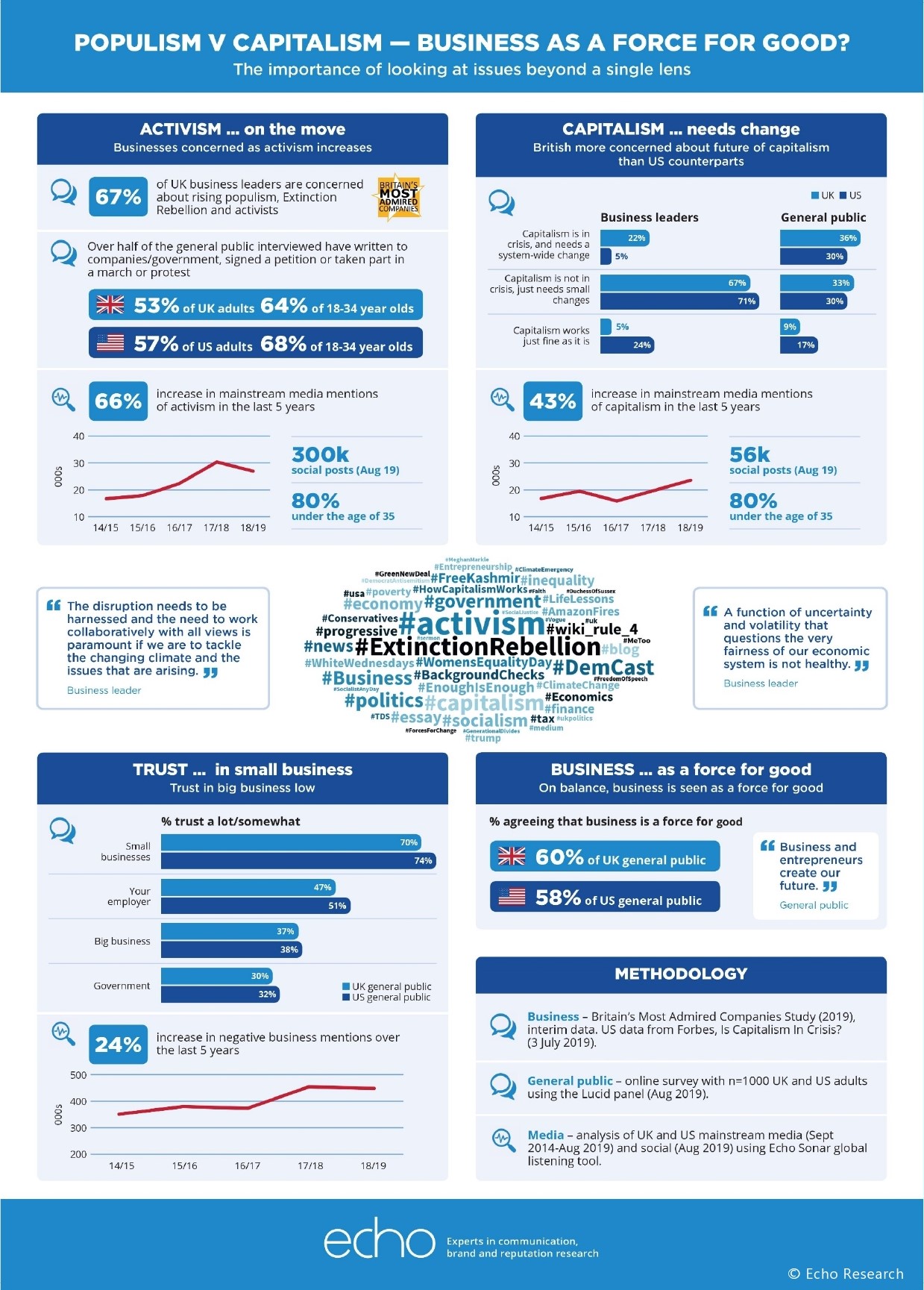 Over half of all adults in the UK and US have written to government or companies, signed petitions and taken part in marches or protests.  Among 18-34 year olds, the percentage is even higher, according to Echo Research’s study into populism vs capitalism, released today.

Echo also found that two-thirds (67%) of businesses in the UK admit to being concerned about rising populism and activism.

Echo’s study found that capitalism is increasingly in the public eye and called into question, with media attention in the UK and US alone up 43% in the last five years.  Activism, too, is on the rise – with media reporting up 66% and over 300,000 social media posts on this alone in the last month, 80% of which were driven by those under the age of 35.  Of the social media posts, the conversation is focused on Extinction Rebellion through to concerns about climate change, sexism, racism, obstacles to a better life.

According to Sandra Macleod, Group CEO at Echo Research, “all this has been leading to the behaviour we’re witnessing - people are mobilising.”  In the UK 53% of adults polled, and 57% of adults in the US, claim to have written to government or companies, signed petitions and taken part in marches or protests.  Among 18-34 year olds, the activism is higher still at 64% and 68% of those polled. “This is all giving rise to greater challenges to governments and businesses as they come to terms with greater calls for change, accountability and action.”

“We see that populism is on the rise, fed by fears and frustrations over inequalities, disadvantage, mistrust of elites and their seeming lack of action on the things that matter whereas capitalism is being questioned with its mistakes, misuse and seeming misalignment with societal goals.”

While Echo’s survey shows increasing distrust of big business and government alike, the trust in one’s employers is relatively stronger (on average close to half trust employers) and in small businesses stronger still (74% in the US and 70% in the UK).

“Entrepreneurs, employee-owned and purpose-driven businesses, increasing competition, collaboration and innovation and are part of the solution to restoring trust in business. Policy makers and regulators need to become enablers of that change,” added Macleod.

The research will be launched at Echo’s 2019 Annual Summit on Populism v Capitalism, 10 September 2019.

The research was conducted by Echo Research in August 2019 and consisted of 1000 interviews with a representative sample of the general public in the UK and the US. It also includes interviews with over 50 C-suite business leaders as part of Echo Research’s Britain’s Most Admired Companies study.